There is always alarm when a new invasive pest makes its way into the United States. Several invasive flies have caused concern in the past, including Mediterranean fruit fly (Ceratitis capitata), olive fruit fly (Bactrocera oleae), and spotted wing drosophila (Drosophila suzukii). The newest fly pest of concern in California is the black fig fly (Silba adipata), a species that exclusively feeds and reproduces on figs.

Black fig fly is originally from the Mediterranean region and can currently be found throughout southern Europe, north Africa, and the Middle East. More recently, the black fig fly was found infesting figs in South Africa (2007), Mexico (2020), and now southern California (2021). California produces close to 100 percent of the U.S. fig crop. Luckily, the fly has not yet been recovered in the Central Valley, where a majority of commercial fig acreage is located. Following detection in Mexico, the U.S. Department of Agriculture’s Animal and Plant Health Inspection Service placed additional restrictions on the importation of fresh figs from Mexico to the United States.

In a new article published in April in the open-access Journal of Integrated Pest Management, our team at the University of California, Riverside, and UC Cooperative Extension detail current knowledge of black fig fly biology and management and efforts underway to better understand how to respond to this new invasive species.

Black fig fly is a small, glossy black fly with reddish eyes and brown legs, approximately 3.5 to 4.5 millimeters long. Adults are known to feed on sap from overripe fig fruits and have shown a strong preference for the milky latex secretions coming from fruits. Females have a long, sharp ovipositor that aids deposition of egg clusters in the ostiole of fig fruits, and they appear to strongly prefer unripe fig fruits.

Larvae emerge from eggs inside of the fig and feed on internal fruit tissue, causing damage that can lead to premature fruit drop from trees. When ready, larvae make their way out of the fruit (causing a characteristic small exit hole), drop to the soil, and pupate. Pupae are the overwintering stage and in spring they emerge, mate, and begin to attack figs. Black fig fly is multivoltine and can have between four and six generations per year under a Mediterranean climate.

Adult black fig fly populations can be monitored using a McPhail-type trap baited with either torula yeast or a combination of 2 percent ammonium sulfate and hexanol. Following local reports of infestation in southern California, traps were deployed in a few locations in Ventura and Santa Barbara counties in 2021. Both lures were successful at attracting and capturing adult black fig fly. 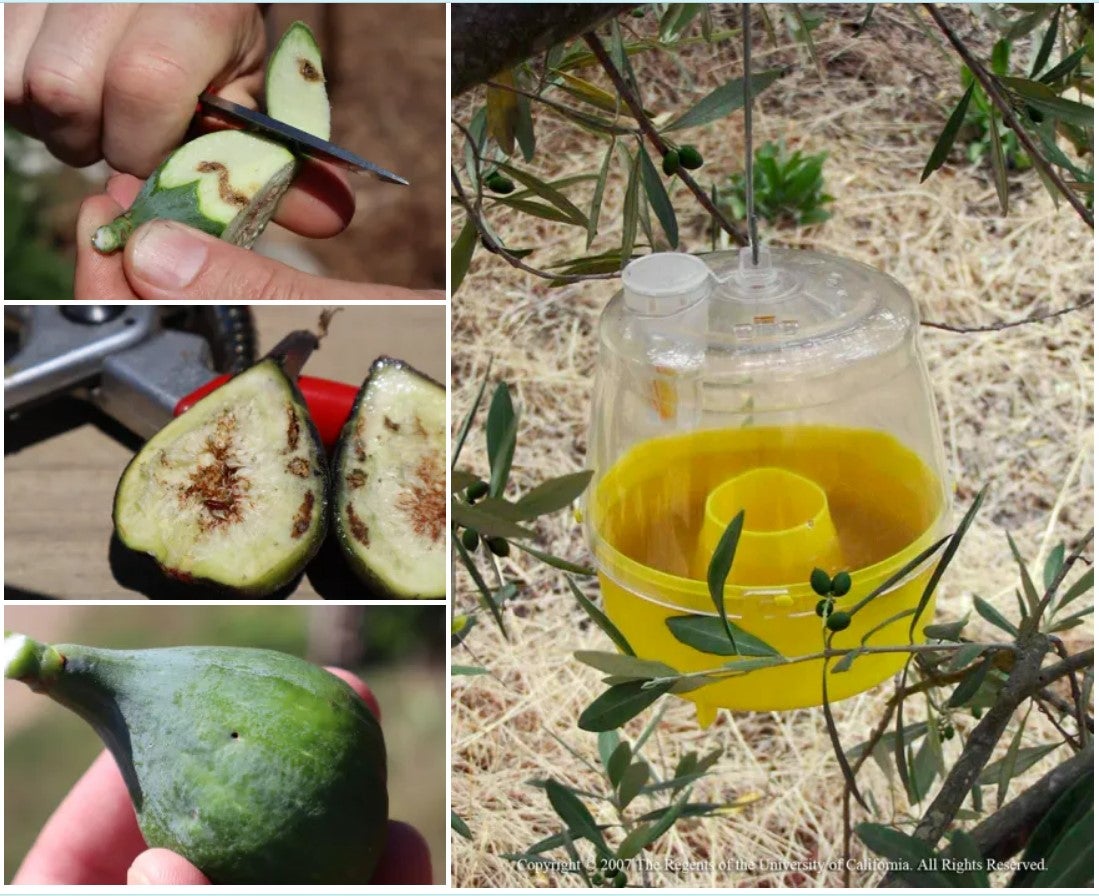 There is very little current information on natural enemies. One study reported parasitization of black fig fly pupae by the wasp Pachycrepoideus vindemmiae, but implications for biological control in commercial orchards remains unclear, as this is a generalist parasitoid that attacks more than 60 different species across Europe and North America.

For now, and in the near future, orchard sanitation is critical and any dropped fruits should be removed and destroyed due to potential larval infestation. Currently, recommendations for chemical control are very limited. Even so, larvae are the damaging stage, and targeting them can be tough due to protection from the outer covering of the fig fruit. Insecticide baits may have greater management potential but have not been evaluated yet in California.

Information regarding general biology and phenology of black fig fly in California is currently unclear, including total number of generations per year, current geographic distribution and potential for spread, minimum and maximum temperature thresholds, and degree-day requirements across life stages. As data are generated to address these unknowns, we will have the ability to better predict the potential spread of this pest in California, as well as timing of key phenological events. More broadly, these data can be used to determine a more comprehensive risk assessment for the major fig production regions in the Central Valley, as well as areas where black fig fly has already established. For instance, one key goal would be to estimate the timing of adult emergence and possible infestation events relative to development and availability of new fig fruits.

Over the next year, data on the developmental biology of black fig fly will be generated and then used to model the potential geographic range of this invasive pest. Additionally, we plan to evaluate various trap and lure types to optimize monitoring protocols, fully delineate the current spread of this pest, and evaluate the efficacy of chemical controls, including materials approved for organic production.

In late summer of 2021, we visited fig growers in southern California and saw firsthand the damage that black fig fly can cause. This pest is particularly challenging because it is rarely evident where a female has laid eggs or where a larva is present inside of the fig. By the time infestation is evident, fig fruits have usually already fallen from the tree. As such, improving monitoring protocols is one of our highest priorities. Black fig fly will continue to be an issue for fig growers in southern California for the foreseeable future, but research is underway to address some of the most pressing questions.

Valeh Ebrahimi, Ph.D., and Kadie E. Britt, Ph.D., are postdoctoral scholars in the lab of Houston Wilson, Ph.D., assistant cooperative extension specialist in the Department of Entomology at the University of California, Riverside. Valeh is located on the UC Riverside campus and Kadie and Houston are located off campus at the Kearney Agricultural Research and Extension Center in Parlier, California. Twitter: @EbrahimiValeh, @kadiehemp, and @treecrops. Email: valehe@ucr.edu, kadieb@ucr.edu, and houston.wilson@ucr.edu.